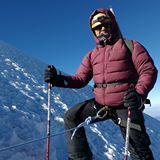 Born in Caracas, Venezuela. He has a degree in Social Communication, mention in Advertising and Marketing; graduated from the prestigious Andrés Bello Catholic University of Caracas.

He has exercised advertising and marketing; as well as editorial journalism since 1994 in Venezuela, the Dominican Republic, Mexico and Australia.

Among his awards he has received the Excellence Award from Procter & Gamble de Venezuela, Scholarships for excellence from the Franklin Whaite Foundation and Mariscal de Ayacucho, in Venezuela.

His graduate thesis, entitled "New Technologies applied to advertising" was published by the Gumilla Center in Venezuela.

Since 2014 he has served as editor of Equilibrium, the natural as a lifestyle; also being the owner of its parent company Mexican Publishing Advertising Company Sa de CV, founded in Mexico City that same year.

In Australia, since 2017 he has served as General Manager and eCommerce Manager of different renowned companies in the local market.

As an editor, he not only talks about the topics he is passionate about, but he is a practitioner of all the ideas he professes on the web. He has been a hiker since he was 10 years old, innate explorer, conservationist, and passionate about health; and for bringing that passion and love to the planet to its readers.